Fort Collins based Painter and Visual Artist, Mike McPuff, has been focusing on Murals for the last several years. His typical medium of choice is Acrylic paint for Indoor projects, and Spray Paint for larger outdoor projects. Originally inspired by the D.I.Y , "Do It Yourself" mentality of his peers, McPuff began to focus on creating a career as a Visual Artist, around 2013. The style McPuff developed over the years, seems to engage the viewer with whimsical, yet surreal concepts, and a kaleidoscopic array of colors. In 2014, McPuff began to use digital software as a means to create art, which quickly lead to his art appearing on television and the front of a well known magazine. While working as a dish washer for several years, McPuff promoted his art in his free time, hanging paintings in coffee shops and networking on social media to create a following . McPuff finished his first outdoor mural on the day of his birthday in 2017. Shortly after, McPuff transitioned from working at a cell phone store to becoming a full time Freelance Visual Artist, which allowed much more time for him to focus on doing murals and other projects. McPuff has since created several large outdoor murals, as well as a number of indoor murals and installations. 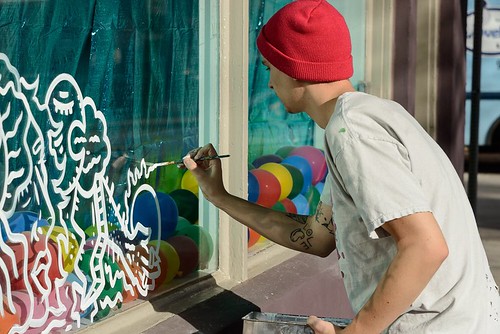